On Tuesday, 24 November, Her Royal Highness Crown Princess Mette-Marit of Norway will be opening the world’s first osmotic power plant at Tofte, outside Oslo.

The prototype that will be opened at Tofte on 24 November has been in development for more than a year. The plant will have a limited production capacity and is intended primarily for testing and development purposes. The aim is to be capable of constructing a commercial osmotic power plant within a few years’ time. 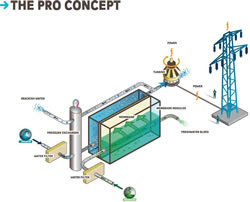 “In an era of major climate change and an increasing need for clean energy, we are proud to be presenting a renewable energy source which has never been harnessed until now. We are also most grateful that the Crown Princess wishes to lend her support to this milestone in our development of osmotic power”, says Statkraft CEO, Bård Mikkelsen.

The energy is based on the natural phenomenon osmosis, defined as being the transport of water through a semi-permeable membrane. This is how plants can absorb moisture through their leaves – and retain it. When fresh water meets salt water, for instance where a river runs into the sea, enormous amounts of energy are released. This energy can be utilized for the generation of power through osmosis.

At the osmotic power plant, fresh water and salt water are guided into separate chambers, divided by an artificial membrane. The salt molecules in the sea water pulls the freshwater through the membrane, increasing the pressure on the sea water side. The pressure equals a 120 metre water column, or a significant waterfall, and be utilized in a power generating turbine.
Posted by John Burke at 05:55

Email ThisBlogThis!Share to TwitterShare to FacebookShare to Pinterest
Labels: Sea Water and Freshwater