Fermentation of Wood chip to Bio-Fuels 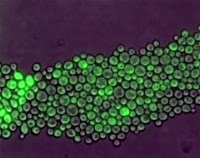 LS9, the Renewable Petroleum Company(TM), today announced a major breakthrough in the ability to make cellulosic-derived advanced biofuels. A collaborative team of researchers from LS9, Inc, the University of California at Berkeley, and the U.S. Department of Energy's Joint BioEnergy Institute (JBEI) have developed a microbe that can produce an advanced biofuel directly from cellulosic biomass in a one-step process.

Using the power of synthetic biology, the team of researchers engineered a microbe that consolidates advanced biofuels production and cellulosic bioprocessing for the first time. This breakthrough enables the production of advanced hydrocarbon fuels and chemicals in a single fermentation process that does not require additional chemical transformations.

The team of scientific collaborators that included LS9 scientists Zhihao Hu, Andreas Schirmer, Amy McClure, and Stephen del Cardayre, and the U.C. Berkeley and JBEI team of Eric Stein, Yisheng Kang, Gregory Bokinsky and Jay Keasling, have published the results of this research in the January 28, 2010 edition of the journal Nature. The paper is entitled: "Microbial production of fatty acid-derived fuels and chemicals from plant biomass."

"This was truly a team effort that demonstrates the strength of combining academic, government, and industrial efforts and the importance of grant programs, such as the UC Discovery Grant, which support them," added Jay Keasling, Professor of Chemical Engineering at the University of California, Berkeley and Chief Executive Officer of the Joint BioEnergy Institute.

LS9 is the low-cost producer of renewable advanced diesel products. LS9's UltraClean(TM) Diesel is the only finished fuel directly produced by fermentation of renewable raw materials in a single step. The company's proprietary one-step process has higher yields and removes additional production costs associated with the multi-step processes required by other renewable diesel technologies. LS9's technology also results in superior products that are designed to uniquely achieve optimal overall performance. A leader in synthetic biology, LS9 genetically engineers microorganisms to precisely produce fuels to have desired properties such as cetane, volatility, oxidative stability and cold-flow, while offering an 85% reduction in greenhouse gas emissions when compared to conventional diesel. The published research demonstrates how the LS9 organisms can be further engineered to directly convert biomass to these advanced fuels and chemicals.
"LS9's single-step production technology already positions LS9 to be the low-cost producer of low-carbon advance biofuels using first generation feedstocks such as sugar cane," said Bill Haywood, Chief Executive Officer, LS9, Inc. "This amazing breakthrough represents a significant advancement toward the low cost production from cellulosic biomass, which will lead to greater reductions in greenhouse gas emissions, lower-costs, and an ability to leverage abundant non-food feedstocks throughout the world."

The team of collaborators will now jointly work on optimizing the efficiency by which their engineered microbe can convert cellulosic biomass into advanced biofuels.

JBEI is one of three Bioenergy Research Centers funded by the U.S. Department of Energy to advance the development of the next generation of biofuels. Headquartered in Emeryville, California, JBEI is a scientific partnership led by Lawrence Berkeley National Laboratory (Berkeley Lab) and includes the Sandia National Laboratories, the University of California (UC) campuses of Berkeley and Davis, the Carnegie Institution for Science (located on the campus of Stanford University), and the Lawrence Livermore National Laboratory.
www.ls9.com
Posted by John Burke at 17:05

Email ThisBlogThis!Share to TwitterShare to FacebookShare to Pinterest
Labels: wood oil for cars