Carbon Capture and Synthetic Fuels: Too Good to be True 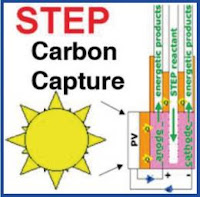 In the Solar Thermal Electrochemical Photo (STEP) carbon capture process, the sun’s visible light and heat are used to capture large amounts of carbon dioxide from the atmosphere and convert it to solid carbon for storage or carbon monoxide for fuel generation.

By using the sun's visible light and heat to power an electrolysis cell that captures and converts carbon dioxide from the air, a new technique could impressively clean the atmosphere and produce fuel feedstock at the same time. The key advantage of the new solar carbon capture process is that it simultaneously uses the solar visible and solar thermal components, whereas the latter is usually regarded as detrimental due to the degradation that heat causes to photovoltaic materials. However, the new method uses the sun’s heat to convert more solar energy into carbon than either photovoltaic or solar thermal processes alone.

The new process, called Solar Thermal Electrochemical Photo (STEP) carbon capture, was recently suggested theoretically by a team of scientists from George Washington University and Howard University, both in Washington, DC. Now, in a paper just published in The Journal of Physical Chemistry Letters, the scientists have experimentally demonstrated the STEP process for the first time.
“The significance of the study is twofold,” Stuart Licht, a chemistry professor at George Washington University, told PhysOrg.com. “Carbon dioxide, a non-reactive and normally difficult-to-remove compound, can be easily captured with solar energy using our new low-energy, lithium carbonate electrolysis STEP process, and with scale-up, sufficient resources exist for STEP to decrease carbon dioxide levels in the atmosphere to pre-industrial levels within 10 years.”

The STEP process is the first and only method that incorporates both visible and thermal energy from the sun for carbon capture. Radiation from the full solar spectrum - including heat - is not usually considered an advantage in solar technologies due to heat’s damage to photovoltaics. Even in the best solar cells, a large part of sunlight is discarded as intrinsically insufficient to drive solar cells as it is sub-bandgap, and so it is lost as waste heat.

By showing how to take advantage of both the sun’s heat and light for capturing and splitting carbon dioxide, the STEP process is fundamentally capable of converting more solar energy than either photovoltaic or solar thermal processes alone. The experiments in this study showed that the technique could capture carbon dioxide and convert it into carbon with a solar efficiency from 34% to 50%, depending on the thermal component. While carbon could be stored, the production of carbon monoxide could later be used to synthesize jet, kerosene, and diesel fuels, with the help of hydrogen generated by STEP water splitting.

“We are exploring the STEP generation of synthetic jet fuel and synthetic diesel,” Licht said, “and in addition to carbon capture, we are developing STEP processes to generate the staples predicted in our original theory, such as a variety of metals and bleach."