October 9, 2013.– Abengoa (MCE: ABG.B), the international company that applies innovative technology solutions for sustainability in the energy and environment sectors, has announced that Solana, the world´s largest parabolic trough plant with a total installed capacity of 280 MW (gross) and also the first solar plant in the United States with thermal energy storage, has successfully passed commercial operation tests. This milestone marks a major accomplishment for Abengoa and the Concentrating Solar Power (CSP) industry. 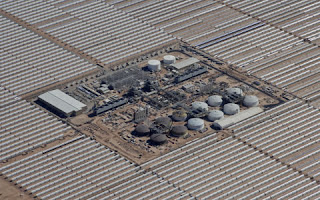 Solana is the first solar plant in the U.S. with a thermal energy storage system that is able to generate electricity for six hours without the concurrent use of the solar field, which is a turning point for renewable energy in this country, being a tangible demonstration that solar energy can be stored and dispatched upon demand.
Solana, located near Gila Bend and about 70 miles southwest of Phoenix, Arizona, began construction in 2010 and on Monday, October 7, successfully fulfilled production forecasts required to date and testing for commercial operation. These tests included operating at the turbine’s full capacity while charging the thermal storage system, continuing to produce electricity after the sun went down, and starting up the plant and producing 6 hours of electricity using only the thermal storage system. These tests successfully demonstrated the various operation modes of the plant’s operation.
Abengoa’s first utility-scale solar plant in the United States employs parabolic trough technology. This technology consists of parabolic shaped mirrors mounted on structures that track the sun and concentrate the sun’s heat, later transforming water into steam and powering a conventional steam turbine. This mature technology has additional value since the heat can also be stored and used to produce clean electricity after the sun goes down or during a transitory period.
This ability to generate electricity when needed, or dispatchability, is one of the unique characteristics of concentrating solar power versus other types of renewables. Solana’s thermal storage system, without the use of the solar field, can produce clean energy for six hours at maximum power. These six hours will satisfy Arizona’s peak electricity demands during the summer evenings and early night time hours. Dispatchability also eliminates intermittency issues that other renewables, such as wind and photovoltaics, contend with, providing stability to the grid and thus increasing the value of the energy generated by CSP.
Arizona Public Service (APS), the largest utility in Arizona, will purchase all of the electricity produced by the solar plant for 30 years through a power purchase agreement with Abengoa.
Solana will generate the clean energy equivalent to that needed to power 70,000 households and will prevent about half a million tons of CO2 from being emitted into the atmosphere per year. The construction of Solana led to the creation of more than 2,000 jobs and a national supply chain that spans 165 companies in 29 states.
The total investment of the plant is approximately two billion dollars and during financing, Solana received a federal loan guarantee for $1.45 billion from the United States Department of Energy Federal Loan Guarantee Program. This support made the construction of Solana possible, creating or maintaining thousands of jobs both in the building of the plant as well as those direct and indirect jobs in the supply chain, as well as providing the Southwest with clean, sustainable energy using innovative technology.
Abengoa currently has 1,223 MW of concentrating solar power in operation and 430 MW under construction. It is the largest CSP company in the world and one of the few that constructs and operates both solar tower and parabolic trough plants.
Posted by John Burke at 11:12