Pumped Storage - A 'Battery' of sorts

The Principles of Pumped Storage 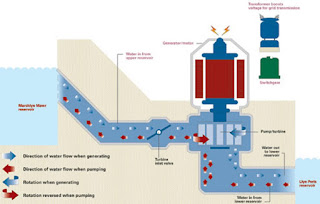 Two reservoirs at different altitudes are necessary. When the water is released, from the upper reservoir under gravity, energy is created by the downflow which is directed through high-pressure shafts, linked to turbines.

In turn, the turbines power the generators to create electricity.

Water is pumped back to the upper reservoir by linking a pump shaft to the turbine shaft, using an electric motor to drive the pump.

A dynamic response - In the example of Dinorwig's six generating units, they can achieve maximum output, from zero, within 16 seconds.

In effect this pumped storage system is a form of demand management, in short a "battery" of stored potential energy.

Dinorwig and Ffestiniog supply electricity to the Grid on a daily basis, as well as providing back-up for periods of heavy demand. The stations offer fast response times - in the case of Dinorwig, probably the fastest of any power facility in the world - 1,728MW from standstill n just 90 seconds.

Each of Dinorwig's six generating units can produce 288MW of electricity, offering a combined station output of 1728MW. Ffestiniog's four 90MW units have a combined generating capacity of 360MW.

The project was begun in 1970 with an environmental and economic appraisal of three sites, which seemed to offer the right conditions. In 1972 Dinorwig was chosen largely on environmental grounds (the area is already extensively altered by man – the Slate quarries – and attracts thousands of visitors, so can't be said to be wild: the other two sites were much less industrialised), and in 1973 the Act permitting Dinorwig to be built was passed. Exploratory tunnels and bypasses constructed, but the main civil engineering contract was not let until December 1975 and started in January 1976. It was the largest civil contract in Europe at the time (probably now overtaken by projects such as the Channel Tunnel).
Over the next 6 years the civil construction was continued, the mechanical engineering (putting in the Machines) and the electrical side (all the transmission gear, switching etc.) being started as and when. Areas of excavation and building allowed. The first generation was in 1982; the scheme was in full production and officially opened in 1984.
The workforce peaked at 2,700 of which 90% were local. The agreed figure had been 70%. So no work camps were necessary, most living at home; this reduced labour relations difficulties both with the local communities, and the strife within camps, which sometimes exists when people work and live too closely, without the usual outlets.
Since so much local labour was used, training was necessary. As work progressed, and different phases of the work were reached, men were retrained in the new skills. Considerable EEC grants aid was given to help with the training. The labour relations at Dinorwig, at a time when there was considerable unrest elsewhere, are reckoned to have been exceedingly good. There were regular consultations between management, workforce and local communities, with Local Liaison Committee meetings every month, at which any problems were aired and resolved.
Environmental issues included maintenance of water quality (there was daily, weekly and monthly sampling at up to 20 sites), protection of salmon and trout stocks, preservation of the Arctic Charr, and revegetation of upper dam and lower works, as well as the most costly part of the environmental care – undergrounding of the transmission line from Dinorwig to the National Grid, Landscaping was undertaken by one of the leading landscape architects, Sir Frederick Gibberd.
As regards future energy use – pumped storage at the present time uses night time electricity production from 'base-load' (generally very large or nuclear) power stations. So it is not really a 'renewable resource' station. However, if there were a great deal of renewable energy in the future, all round the world, then pumped storage would be vital – e.g. solar energy is only produced during the day, and depends on the degree of sunlight; tidal energy varies on a monthly cycle, hydro depends on rainfall, wind is seasonal, variable, and unpredictable. The best way to store energy so produced is to use pump storage.
By Denis Egan - https://www.flickr.com/photos/theancientbrit/545879229/, CC BY 2.0, https://commons.wikimedia.org/w/index.php?curid=15817352