Why not add some serious focus on ENERGY DEMAND and ENERGY EFFICIENCY.

We in the UK like most of the western world have some pretty miserable performance characteristics when considering turning fossil fuels into electricity. Around 25% fuel efficiency. The remaining 60% losses to 'low grade heat' dissipated to the cooling towers (erected as a testimony to waste), and 10-12% grid distribution losses etc.

Just as bad in the USA see graphic: Interestingly the figures for generation losses translate into 67.2% of the energy inputs, even after allowing for the Hydro and other renewable inputs. Poor efficiency indeed! 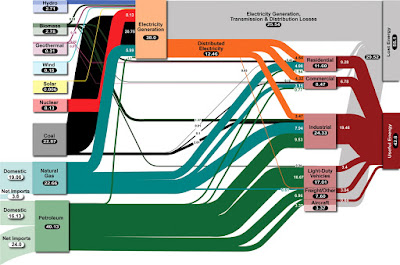 The nuclear cycle is similar with the cooling towers (designed to 'waste' heat energy) warming up the atmosphere rather than being usefully employed to heat buildings etc.

BUT WAIT: we can't use the heat from cooling towers because all power stations (with the exception of Ferrybridge and Trent) are too far away from population centres to justify the district heating distribution network.

As a historical pointer Battersea Power Station, London had no cooling towers (land was too expensive) so they piped the heat energy to Pimlico and sold it to the residents in 1950! And its still there today.

So in effect our whole approach to centralized power (electricity but not heat energy) is flawed. THATS THE FIRST PROBLEM.

For the sake of brevity I will summarize:
THERE IS NO ENERGY POLICY: What we have is a series of lobby groups shouting at weak Governments. What goes for a 'policy' is to do with taxation on North Sea Oil and other taxes on transport fuels. The rest is to keep you quiet.

THERE ARE NO DRIVERS TO MAKE POWER GENERATION EFFICIENT: Otherwise we would see hundreds of 'mini' (unseen to the 'man/person in the street') power, heat and (optional chilled water) generation systems providing around 85+% fuel efficiency heating and powering our homes, offices and retail parks. What we do is just pay more and more per kWh, heck the Government even taxes us for the Carbon because of this inefficiency. On top of that they want us to stump up to artificially support renewable because you have been 'told' they are more expensive(?). Renewable can stand on their own. Which is more than can be said for Nuclear.

The factors that are determining our plans for electricity supply (not energy needs) are still based on the hopeless inefficiency I have merely touched on. Its also based of the economist's 'favourite mistake' of constant upward industrial growth and electricity needs expanding as they have done in the past. That will not happen.

In fact the power companies will never object to talk of brown-outs and demand outstripping supply. It's their business. They get bigger and more powerful on comments like that.

The real alternatives are for efficient 'parish' or even 'estate' scale power and heat generation systems utilising all energy sources, gas, wind, geo-thermal, small scale hydro and solar thermal. (forget the vastly over sold solar PV for the next 10 years). Then we will have our own independent power supplies and then we might actually see real ENERGY COMPETITION.

So start forming your local energy co-operatives, forget Nuclear NIMBY'ism and lets create real energy security in our homes and offices. Because we certainly don't have it now if we continue with the energy propaganda that fills the press and the BBC.
Posted by John Burke at 10:50