As Eskom continues to debate the prolonging of projects, Kusile coal-fired power station continues to be the center of attention. However, Eskom CEO Jacob Maroga insisted that Kusile would remain on schedule.

“We are saying… let’s commit ourselves to ensuring that [Kusile] doesn’t stop, and to the extent that there is a [funding] gap, let’s see how we can close it,” Maroga said. “We want to continue with the build,” he stressed, adding that Eskom was also committed to closing what would be a R30-billion funding gap should the requested increases be granted.

Yet he also admitted that the state-owned utility was continually assessing the “shifting of certain cash flows” as well as the possibility of bringing in “other parties to assist with the build.”

If the project was put on hold, Eskom would have a greater cash flow. Alternately, the state-owned utility would face the prospect of serious penalties including the increase in costs once the project was restarted. The only potential upside from the deferral of Kusile would be the impetus that it might provide to the much-frustrated independent power producer (IPP) program. Indeed, the government and Nersa would have to turn to IPPs to urgently remedy what would otherwise be a significant supply-side gap.

So, what will Eskom do?

This photo of their Camden Coal Fired station is only 27-32% energy efficient. This means that well over 60% of the heat liberated goes up the cooling towers to warm the air. That means they burn 3-4 times more coal to generate just electricity: This is the magnitude of their waste and one-dimensional thinking. 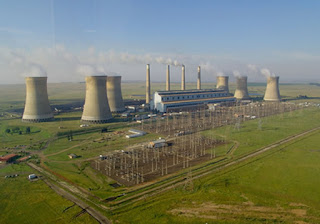 The World Wide Fund for Nature (WWF) in South Africa asked the government and state-owned utility Eskom to reconsider plans to complete the construction of the Kusile coal-fired plant which would substantially increase to country’s carbon emissions.

WWF South Africa trade and investment advisor Peet du Plooy said that the power station could add around 20 million tons a year of carbon emissions in addition to Eskom’s existing 200 million ton emissions. “Just to put that into context that is as much as the 20 least-emitting nations combined. So, we will jump another 20 nations, just by building one power station.”

The call from the WWF came shortly after Eskom indicated that it might have to defer certain projects, such as the R100-million Kusile power station, if a far higher tariff path did not emerge. The project could be delayed by between 18 and 36 months. The first unit of Kusile was currently scheduled to come online by early 2013.

“It is essential that South Africa review our energy development plans, as recognized by a range of stakeholders, including mainstream business,” WWF South Africa climate change program manager Richard Worthington concluded
Posted by John Burke at 19:01