Energy Efficiency in Trucks and Cars

(PhysOrg.com) -- Manufacturers can take advantage of multiple strategies to build fuel-saving cars and trucks, says two congressionally mandated reports by the National Academies, but they won't come without a price 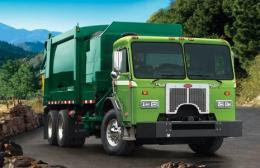 Presidential Professor John Johnson of Michigan Technological University served on the two committees that evaluated various technologies to reduce and improve fuel consumption. One focused on medium- and heavy-duty vehicles, such as tractor-trailers, transit buses and work trucks. The other addressed fuel consumption in passenger cars, sport-utility vehicles, minivans and other light-duty vehicles.
The medium- and heavy-duty vehicle report also recommends approaches that manufacturers and federal agencies can consider as they develop fuel consumption regulations. Congress began regulating the fuel economy of cars and light-duty trucks back in 1975, but there are no such standards for buses and big trucks, which account for about 26 percent of the transportation fuelused in the US.
At a May 21 Rose Garden press conference, President Barak Obama signed a memorandum on fuel efficiency standards directing the EPA and the National Highway Transportation Safety Agency to enact new standards in 2014 for medium- and heavy-duty vehicles and for light-duty vehicles for 2017-25 based on the reports' findings.
The report recommends that any regulation of medium- and heavy-duty vehicles should reflect the efficiency with which a vehicle moves goods or passengers, such as gallons per ton-100 mile, a unit that reflects the amount of fuel a vehicle would use to carry a ton of goods 100 miles.
"This is going to bring down the costs for transporting goods, serving businesses and consumers alike," Obama said of the impending standards for heavy- and medium-duty vehicles. "It will reduce pollution, given that freight vehicles produce roughly one-fifth of the greenhouse gas emissions related to transportation." In addition, it will reinforce US leadership in the clean energy sector, he said.
According to the report, using advanced diesel engines in tractor-trailers could lower their fuel consumption by up to 20 percent by 2020, and improved aerodynamics could yield an 11-percent reduction. Hybrid power trains could lower the fuel consumption of vehicles that stop frequently, such as garbage trucks and transit buses, by as much 35 percent.
While these improvements would raise the price of the vehicle, the report notes that many of these technologies would pay for themselves handily, even at today's energy prices.
The report estimates the costs and maximum fuel savings that could be achieved by 2020 if a combination of technologies were used. The best cost-benefit ratio was offered by tractor-trailers, whose fuel use could be cut by about 50 percent for about $84,600 per truck; the improvements would be paid for over ten years provided fuel prices are at least $1.10 per gallon.
The fuel use of motor coaches could be lowered by 32 percent for an estimated $36,350 per bus, which would be cost-effective if the price of fuel is $1.70 per gallon or higher.
Diesel was about $2.95 per gallon on June 7.
Johnson predicted that lower fuel consumption would be more acceptable to the trucking industry. "This sector is driven far more by fuel efficiency" than light-duty vehicle users, he said. "The biggest users in this category are over-the-road tractor trailers. They burn 50 percent of fuel in heavy- and medium-duty vehicles, and drivers pay more attention to fuel consumption."
Spark-ignition engines will continue to be the dominant type of engine in the US for the next 10 to 15 years and have seen many technology improvements that are producing significant fuel savings. As a result, automobile manufacturers are able to create packages of technologies that can meet cost and effectiveness targets in small, incremental steps. For example, the report notes the promise of cylinder deactivation - which enables a six- or eight-cylinder engine to run on fewer cylinders when full-engine power is not needed, such as on flat loads. Deactivation can reduce fuel consumption by as much as 10 percent at a retail vehicle price increase of $350 to $500, the report says.
According to its estimates, adopting the full range of technologies to medium- and full-size passenger vehicles with spark-ignition engines could reduce fuel consumption by 29 percent at a cost of $2,200 to the consumer. Replacing spark-ignition engines with diesel engines and components would yield fuel savings of about 37 percent for approximately $5,900 per vehicle. Spark-ignition engines with hybrid components would reduce fuel consumption by 43 percent at an increase of $6,000 per vehicle.
Johnson was less optimistic about how such recommendations might be received by the average car buyer. To meet tougher standards, he said, the auto industry will probably focus on measures like lowering vehicle weight, improving the efficiency of gasoline engines and trying to sell smaller cars. "Price is very important; hybrids and the diesels are costly, and a lot of people can't afford them," he says. "You can't expect them to sell in large numbers unless fuel sells for over four dollars a gallon."
If Congress and the American public were truly committed to reducing fuel usage, Johnson said, we would support higher fuel taxes and use the revenue to encourage a more energy-efficient lifestyle. "Unfortunately," he said, "increasing the fuel tax is dead on arrival relative to the political process."
Provided by Michigan Technological University (news : web)
Posted by John Burke at 10:20