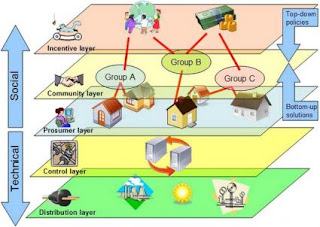 The Energy Web is a power distribution system designed for managing a large-scale, widely distributed network of renewable energy sources. The figure shows the interaction of the different parts of the Energy Web, which includes incentives for "prosumers" (producers and consumers of energy) and allows autonomous self-organization of agents due to evolutionary processes. Image credit: Carreras, et al. ©2010 IEEE.
(PhysOrg.com) -- A decade ago, Gnutella, Kazaa and other early peer-to-peer (P2P) systems showed that a decentralized approach to managing large-scale, widely distributed systems could offer many essential advantages compared to the traditional centralized approach. Since then, researchers have taken the decentralized design method far beyond music sharing, applying it to areas as diverse as database distribution and analysis of biological systems
In a new study, a team of researchers from the Italian research center CREATE-NET has outlined the ways in which decentralized, bottom-up design approaches could play a critical role in managing the complex, massive-scale networks that are becoming more and more widespread. Systems such as the Internet and ubiquitous computing (in which computing extends beyond the desktop computer to become integrated into everyday objects) are two examples of these kinds of large-scale, dynamic systems that operate in open environments with many autonomous users and are constantly evolving.
In their study, the Italian team has discussed the essential features that a decentralized design approach needs in order to support these large-scale networks and provide the necessary degrees of reliability and dependability. As a case in point, they showed how these concepts could be applied to the management of the future generation of Smart Grids, characterized by the inclusion of a large number of distributed and/or renewable energy sources. They call the resulting system the Energy Web, which, as coauthor Daniele Miorandi explains, depicts a future in which bidirectional flows of energy will resemble the way information and data is nowadays exchanged on the Web.
The key to the Energy Web design is the bottom-up approach, in which appropriate laws are implemented to allow desired global behaviors to emerge from only local interactions among individual components. In contrast to the traditional top-down approach, which focuses on performance, the new approach focuses on reliability, stressing how to react to internal failures rather than attempting to avoid them. With reliability in mind, desired behaviors include the ability to self-adapt to unknown conditions, to self-heal in the case of failures, to learn from previous experiences, and to self-protect against external threats. These behaviors require that the system evolves through time in the midst of a changing environment that cannot be accounted for in advance - something that the deterministic approach of traditional methods does not allow for.
When applying this approach to the future Energy Web, the researchers explained how mechanisms and methods should be tuned in order to meet the nature and functional constraints of energy transport and distribution systems. Unlike today’s highly centralized energy systems’ architecture, which for the most part consists of a few large power plants supplying energy to a large number of consumers, the future Energy Web is expected to consist of a very different framework. Large numbers of widely distributed, small-scale energy sources (such as wind turbines and solar panels), smart meters in homes that actively manage consumption, and the emergence of “energy prosumers” (citizens that both produce and consume energy) make the future Energy Web look much more similar to the Internet than to existing power grids. By carefully managing our future energy consumption, the researchers hope to bring about cost and energy savings, as well as a reduction in fossil-based energy production, by using a well-planned, decentralized approach.
More information: Iacopo Carreras, Daniele Miorandi, Regis Saint-Paul, and Imrich Chlamtac. “Bottom-Up Design Patterns and the Energy Web.” IEEE Transactions on Systems, Man, and Cybernetics - Part A: Systems and Humans. DOI:10.1109/TSMCA.2010.2048025
Posted by John Burke at 10:15